The Linux security model supports different levels of privileges and enforces them through hardware (see the status register). Because of its lower privilege, user space processes cannot access hardware directly, manipulate other user processes or the kernel and is limited to and constrained by its virtual memory space, which is only a portion of the total physical memory on the system. Any memory accesses are mapped from virtual memory to physical memory and controlled by the memory management unit.

The system call names are portable, in the sense that the names don’t change across distributions (this is for Linux, obviously), so a library for a particular architecture increases portability. However, the names, number of parameters and their order is architecture dependent. More on this later in the section on Library Wrapper Functions.

A userland process will make a syscall when it needs access to the system’s hardware, such as accessing protected memory, creating/forking child processes, creating a file, any kind of I/O, et al. Applications running in user space request these services by making system calls, which, depending on the chipset, use different techniques to transfer control to the kernel (a privilege mode switch).

Older RISC processors only are able to initiate this by a software interrupt (generically referred to as a trap), but more recent CISC architectures can avoid the overhead of a software interrupt by enabling a fast entry to the kernel using the SYSENTER and SYSEXIT instructions.

SYSCALL/SYSRET were created by AMD and SYSENTER/SYSEXIT by Intel, but they do the same thing.

Either technique enables the necessary privilege switch switch from to kernel mode. Control passes to the kernel, and the CPU will run the privileged instructions only if the requesting program has permissions to access the requested service (whether the operation is legal or illegal is out of scope of this brief introduction to system calls).

If legal, the kernel executes the instructions, switches the privilege mode back to the unprivileged user mode and returns control to the calling process.

Importantly, most Unix derivatives, like Linux, don’t perform a process context switch when processing a syscall. Instead, they do a privilege context switch, and the system call is processed in the context of the process that called it.

At this point, a legitimate question would be: What is the difference between a process context switch and a privilege context switch?

The kernel, now running in kernel mode, performs the operations and returns. If there is an error, it sets the error code in the global errno variable and instructs the wrapper function to return a non-zero return code, usually -1, so the user space process knows there was an error.

It also restores the previous process context from the PCB before returning. The value of the status register is also updated to reflect that there has been another privilege context switch, that is, from kernel space back to user space.

In addition, when performing a process context switch, if the processor memory caches are flushed, then every subsequent memory lookup will result in a cache miss that will need to be fetched from physical memory through the MMU.

So, saving and restoring processor state, memory cache misses and operations that occur or can be a consequence of a process context switch contributes to why these context switches are referred to as expensive.

A privilege context switch, on the other hand, is processed within the same context as the process that invoked the system call. As the name states, the switch that occurs is a change of privilege, not of the process, from user mode to kernel mode. The MMU has set the kernel mappings as non-executable, so they cannot be accessed while in user mode. The syscall has a trap that triggers a jump to a location in the kernel called the interrupt vector table that contains mappings to procedures that will be executed and then carry out the instructions on behalf of the user process. 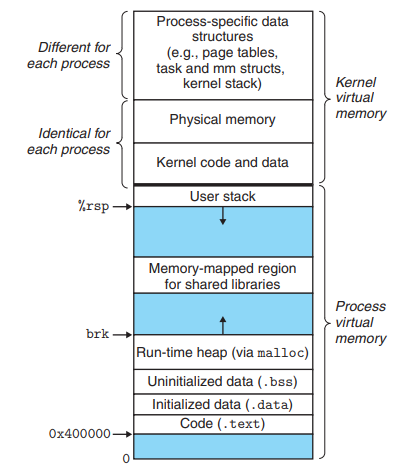 Note, however, that the virtual kernel space may be isolated from the process virtual memory space, a kernel feature known as kernel page-table isolation. This was done to mitigate the Meltdown security vulnerability.

There is usually a thin library wrapper around the syscall itself that has the same name as that of the syscall. This wrapper function then calls through to the system call API interface, usually an implementation of the libc library like glibc.

The function arguments will be the unique system call number and the values for the processor registers. Let’s look at an example of some Go library code that isn’t interfaces with the glibc. The developer wouldn’t call these functions directly, rather the API would define functions that usually have the same name as the implied syscall that would be used in any application code (like read, write, open, etc.).

( The assembly for amd64 can be viewed in the Go repository. )

Incidentally, the kernel knows which subroutine to execute to run when trapped by looking up the software interrupt integer parameter of the syscall and then using this integer to look up the function in the interrupt vector table.

When a trap occurs, the trap (software interrupt) instruction forces the program to jump to a well-known address based on the number of the interrupt, which is provided as a parameter. In the example above, the interrupt number is passed as the trap function parameter.

A high-level language such as C, Go, Python, etc., will call these lower-level wrapper functions from its own API, and, as a result, most developers make syscalls without even knowing it.

See the Examples section to see these higher-level API functions.

I wrote a recent article On Virtual Machines that has a section on emulating syscalls in a virtualized environment. Please see that post for more information.

strace is a well-known tool used to trace the system calls and signals of a process. It takes the command it’s tracing as an argument:

Let’s take a look at using it to trace a very simple C program:

Compile it and run:

From the strace man page:

Omit the -c option to get see the about the calls parameters.

This is a great way to get an idea of not only the system calls made by a process but their parameters that give a glimpse into how user space communicates with kernel space.

For more insights, see Liz Rice’s illuminating talk on The Beginner’s Guide to Linux Syscalls in which she recreates strace in a small amount of Go code.

There are other tools like ftrace that are worth researching.

Although I won’t enumerate them here, there are six categories of system calls:

The number of system calls varies according to the operating system. For instance, Linux has over 300 (see the syscalls(2) man page for a complete list), FreeBSD has over 500 and Windows has over 2000.

The subroutine call callq is probably the system call, but to see it more explicitly, let’s use our old friend gdb. Here, we’ll target just the function calls we’re interested in:

Now, we can see it call into the glibc wrapper function puts (memory address 0x1050) and then the jump to the privileged kernel instructions, which is allowable now that the context has switched to kernel mode.

We can compile the program and use objdump -d to get the full disassembly.

The following are only examples of how a high-level language like C and Go have their own library functions that a developer would use in their application code. They are obviously easier to use than writing assembly or even calling the low-level library wrapper functions themselves, such as the glibc implementation

In this article, I tried to strike a balance between going deeper than most introductory articles on system calls without getting too much in the weeds. This was difficult to do, and I may end up doing a follow-up to this or expanding these sections in the future, as many of these subjects are very important and interesting and, as such, owed more than just a superficial coating.